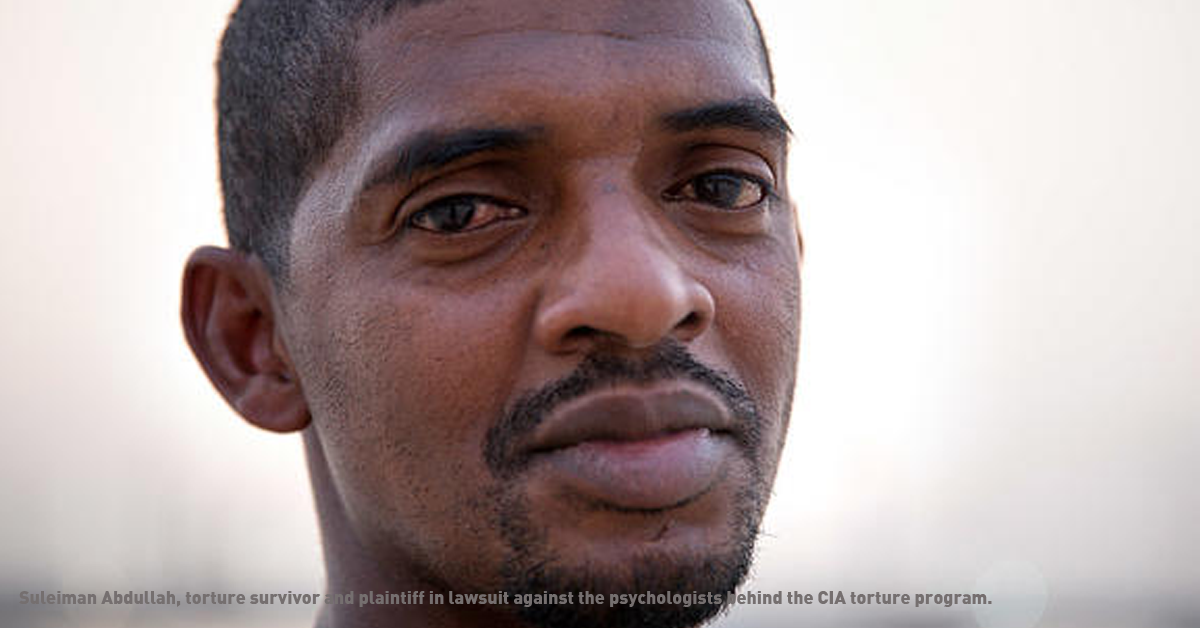 Three men who were tortured by the CIA are suing the architects of the agency’s torture program.

The ACLU filed a lawsuit today on behalf of Gul Rahman, Suleiman Abdullah Salim, and Mohamed Ahmed Ben Soud, who were never charged with or even accused of any crime but were nonetheless subjected to brutal torture methods developed by CIA-contracted psychologists James Mitchell and John “Bruce” Jessen.

Mitchell and Jessen, who had previously worked for the U.S. military, helped convince the CIA to adopt torture as official policy. They devised the methods to which the plaintiffs were subjected, including being slammed into walls, stuffed inside coffin-like boxes, exposed to extreme temperatures and ear-splitting levels of music, starved, inflicted with kinds of water torture, and chained in stress positions designed for pain and to keep them awake for days on end.

“Mitchell and Jessen conspired with the CIA to torture these three men and many others,” said Steven Watt, a senior staff attorney with the ACLU Human Rights Program. “They claimed that their program was scientifically based, safe, and proven, when in fact it was none of those things. The program was unlawful and its methods barbaric. Psychology is a healing profession, but Mitchell and Jessen violated the ethical code of ‘do no harm’ in some of the most abhorrent ways imaginable.”

Plaintiffs Salim and Soud victims are now free but still suffer physically and psychologically from the effects of their torture. Rahman, the other plaintiff, was killed by it.

Mitchell and Jessen proposed to the CIA a program based on the intentional infliction of intense pain and suffering, both physical and mental. They cited experiments conducted in the 1960s in which dogs were subjected to random electric shocks and eventually collapsed into a passive state termed “learned helplessness.” According to Mitchell and Jessen’s theory, if humans were psychologically destroyed through torture and abuse, they would become totally unable to resist demands for information.

In addition to torturing prisoners themselves, Mitchell and Jessen trained and supervised other CIA personnel in their methods. In 2005, they founded a company — Mitchell, Jessen & Associates — that the CIA contracted with to run its entire torture program, including supplying interrogators and security for black sites and rendition operations. According to the Senate report on torture, the government paid the company $81 million over several years. The CIA let Mitchell and Jessen themselves evaluate the effectiveness of their torture in “breaking” detainees, and the agency has since admitted that this was a mistake.

The lawsuit was filed in federal court in Washington state, where Mitchell, Jessen & Associates was based and where Jessen still lives. The plaintiffs are suing Mitchell and Jessen under the Alien Tort Statute — which allows federal lawsuits for gross human rights violations — for their commission of torture; cruel, inhuman, and degrading treatment; non-consensual human experimentation; and war crimes.

The complaint is at: https://www.aclu.org/legal-document/salim-v-mitchell-complaint.