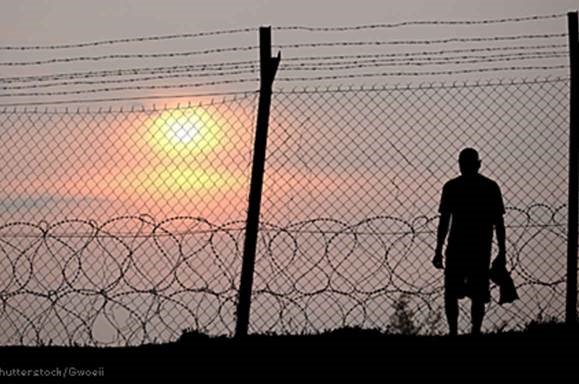 This story originally appeared in the ACLU Speak Freely Blog.

No one should be locked up because they don’t have the money to buy their freedom. But this is the plight of countless men and women currently imprisoned in our immigration detention system.

Last May, Maria Sandra Rivera fled her native Honduras to escape an abusive relationship. Maria had been repeatedly raped and beaten by her former partner and needed to escape. On arriving in the United States, she was detained by immigration authorities while applying for asylum.

Maria did not need be locked up. She had no criminal history and posed no danger to anyone. Nor did she have any intention of running away: To the contrary, she had every incentive to show up for court and fight for asylum, and her friends were willing to give her shelter and drive her court. And in fact, the immigration judge agreed, eventually ordering her release on a $3,500 bond.

Nonetheless, Maria stayed locked up for five months — only to win her asylum claim and her freedom. Why? Maria — like many refugees and other low-income immigrants — couldn’t afford the cash bond.

A federal court today rejected the immigration courts’ longstanding policy of detaining immigrants like Maria unless they can pay a cash bond. The case was brought by the American Civil Liberties Union, ACLU of Washington, and Northwest Immigrant Rights Project. For years, judges in Washington state have required cash bonds even though the immigration laws clearly authorize them to order release on what’s known as "conditional parole"— a supervision order that might require check-ins, travel restrictions, or other conditions to make people show up for court, without requiring that they pay.

The result of this policy was that countless immigrants like Maria have been stuck in detention because they’re poor — even when a judge has found that they posed no danger to the community or flight risk that requires their imprisonment. Under the court’s ruling, judges must now follow the law and consider granting conditional parole — and not just a money bond — when deciding whether an immigrant should be released from custody.

Although today’s ruling applies only in Washington state, immigration courts across the country should take heed and follow to the court’s decision. Indeed, even the Department of Homeland Security (DHS) agrees. As DHS has argued to the Board of Immigration Appeals — which sets the rules for immigration courts nationwide —judges have the power to grant conditional parole, and not just a money bond.

Tying your freedom to your ability to pay is not only unlawful: It’s also bad policy. At a cost of $159 per day, Maria’s detention cost U.S. taxpayers nearly $24,000. In contrast, alternatives to detention — such as telephonic and in-person reporting, curfews, and home visits — cost as low as 17 cents to $17 per person per day.

The cost to basic fairness, however, is priceless.