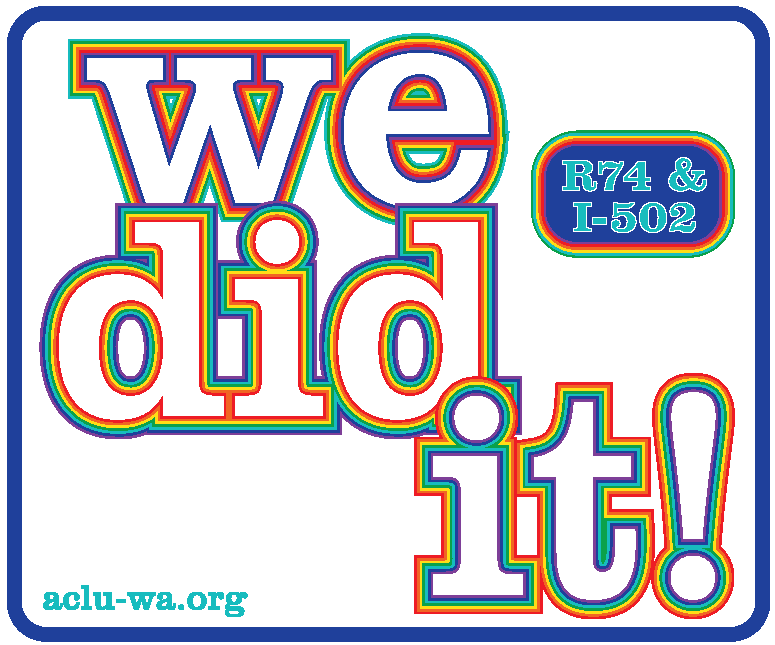 Ever since 9/11, civil libertarians have been known for issuing dire warnings about erosions of fundamental rights: Guantanamo, indefinite detention powers, warrantless wiretapping, America’s addiction to incarceration, attacks on women’s reproductive freedom, use of RFID chips on public school students (yep, a girl in Texas is actually suing her school district over that one). These are serious and ongoing concerns.

Yet as we at the ACLU think about the state of civil liberties on Dec. 15, the anniversary of the Bill of Rights, we find much to celebrate. It’s truly been a year of making history in Washington state.

The ACLU of Washington first represented a gay couple, John Singer and Paul Barwick, seeking to marry in 1971. Four decades after the courts rejected them, the state legislature this past February took the bold step of approving civil marriage for same-sex couples. Though no state had ever approved marriage equality at the ballot box, Washington’s voters upheld our new marriage law by approving Referendum 74.

In early November, at our annual Bill of Rights Dinner, Major Margaret Witt received an award for her heroic persistence in successfully challenging “Don’t Ask, Don’t Tell.” Upon accepting the honor, she proposed on the spot to her partner Laurie Johnson. They’re getting married this month.

Our nation’s misguided and costly "War on Drugs" has undermined civil liberties in many ways: eroding protections against unlawful searches and seizures, imposing overly harsh sentences on individuals and disproportionately impacting communities of color. Five years ago the ACLU-WA launched “Marijuana: It’s Time for a Conversation,” an education campaign to put marijuana law reform on the public agenda. Though we offered to have its video run as a paid “infomercial,” local TV stations either refused to air it or would do so only in the wee hours of the morning.

But this fall saw I-502, a measure that legalizes, regulates, and taxes marijuana use by adults, gain remarkably widespread support. Endorsing it were two former U.S. attorneys, the former head of the local FBI office, Seattle City Attorney Pete Holmes and new King County Sheriff John Urquhart. It passed with more than 55 percent of the vote statewide; it won a majority in 20 of the state’s 39 counties. As of Dec. 6, local law enforcement can no longer arrest adults for who possess up to an ounce of marijuana for personal use.

For decades the ACLU-WA and other civil rights groups have worked to curb excessive use of force by police, especially against communities of color. Two years ago, we were joined by 34 other organizations in calling for the Department of Justice (DOJ) to investigate the Seattle Police Department (SPD). The feds accepted, scrutinized SPD practices, and rendered their verdict: the SPD uses excessive force. A U.S. District Court- supervised consent decree is now in place, with a monitor appointed to watchdog reform efforts. While we’ve seen blue ribbon efforts come and go, the backing of the DOJ and court raise hopes that this time reforms will be long-lasting.

We’re also pursuing other long-needed changes through the courts. For six years in junior and senior high, Russell Dickerson III was subjected to severe verbal and physical harassment by peers in Aberdeen public schools. But he stood up for his rights, and this winter gained a major settlement through an ACLU lawsuit on his behalf. It sent an important message to educators statewide: There’s a price to be paid if you fail to stop bullying.

And this spring, we learned that the SPD had received permission from the feds to employ two unmanned aerial drones. The ACLU pointed out that while police drones may have some valuable uses, they provide an unprecedented ability for the government to spy on law-abiding people. We are insisting that city officials write restrictions on drones into law, and Councilmember Bruce Harrell says that he intends to pass legislation – which would make Seattle the first major city to take such action.

That would be a nice way to make history next year.

This article first appeared in the Dec. 13 issue of Real Change.