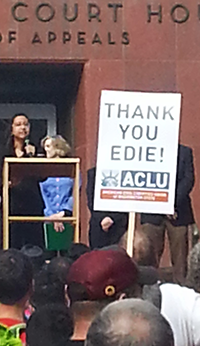 This speech was delivered at a community gathering on the steps of the federal courthouse in Seattle on the day when the Supreme Court issued its historic ruling.

Today is a great day in America – for loving couples and their families, and for Americans who treasure our country’s basic values of freedom and fairness.   If America is be true to its values, they must be applied equally to everyone.  And that’s what the highest court in the land said today.

The ACLU likes to say that “Freedom Can’t Protect Itself.”  It takes real people to defend freedom, and I want to tell you about one of those people – Edie Windsor, the 84-year-old widow who stood up against the Defense of Marriage Act and got it overturned by the U.S. Supreme Court.  The American Civil Liberties Union was proud to represent her in court. Her story illustrates vividly the injustice of DOMA and why it had to go.

Edie and her partner Thea Spyer were together as a committed couple for 40 years and finally got married in 2007. Edie cared for Thea during a very serious illness, before Thea passed away in 2009.

Thea left all her property to the love of her life.  If federal law had treated their marriage equally, Edie would have inherited the property without federal estate taxes. But Edie got some shocking news:  Even though the state of New York recognized their marriage, she would have to pay over $350,000 to the U.S government. That was because the Defense of Marriage Act prevented the federal government from respecting their union.

With the help of the ACLU, Edie fought back in court.  As we celebrate her victory over DOMA today, we celebrate the end of such injustices. Now the federal government will no longer treat married same-sex couples as legal strangers.

Thank you, Edie, for standing up for your rights. And thank all of you for your support of true love and true American values.