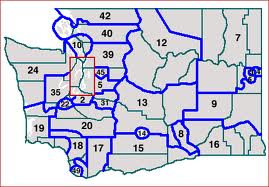 Do you remember all of the publicity about the 2010 census? The numbers have now been tallied, and they will have major impacts in Washington state and throughout the nation.

One of the most important ways in which data from the census are used is in redistricting our nation’s political jurisdictions. In the last decade, Washington’s population increased by more than 14%. As a result, our federal congressional delegation will be increased from 9 to 10 members, giving Washington state an additional vote in the U.S. House of Representatives.

There are significant political consequences to how political districts are drawn. While many of us take it for granted that each person’s vote is roughly equal, it was not until 1964 that the U.S. Supreme Court established the principle of “one person, one vote” in the case of Reynolds v. Sims. And while the make-up of U.S. political districts is generally much more equitable than in the past, the redistricting process is still hotly contested. The parties most interested in redistricting procedures – elected officials, political parties, organized interest groups – realize that the composition of political boundary lines can dramatically increase or decrease the political clout of different groups of citizens, particularly that of populations of color.

This year our state’s congressional and legislative boundaries will be redrawn by the Washington State Redistricting Commission. The commission consists of five members; one member is designated by the minority and majority leaders of each body of the state legislature. The four partisan members then select a non-partisan, non-voting member to chair the commission. In May the commission began holding a series of public forums around the state. Even if you can’t physically attend one of these forums, you can observe and participate through interactive webcasts. The forums and commission deliberations promise to yield interesting, important discussions. One group, for example has already proposed a “majority minority” congressional district to reflect Washington’s increasing racial and cultural diversity.

So when you hear about the work of the redistricting commission in the days ahead, remember: the lines they will be drawing on the political map will have significant consequences for Washington voters  for the decade ahead.