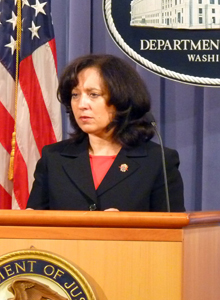 On June 10, the Drug Enforcement Agency (DEA) proclaimed a major victory in the War on Drugs. As stated by Attorney General Eric Holder, Project Deliverance “struck a significant blow against the [Mexican] cartels…, [albeit] just one battle in what is an ongoing war.” The numbers involved certainly are impressive, 2,226 arrests (including 23 here in Washington), 74.1 tons of illegal drugs seized, and $154 million in apprehended assets.

However, Project Deliverance is about more than just flashy photos of seized drugs and stern quotes from law enforcement officials, it is a snapshot of the futility of the War on Drugs. Here is some food for thought:

1) Project Deliverance is proof that the War on Drugs is alive and well despite Drug Czar Gil Kerlikowske’s repeated statement that the United States is no longer waging such a war.

2) The DEA has no shortage of creative names for its operations, but its basic enforcement strategies seem unmovable (investigate, arrest, seize assets, prosecute, incarcerate – repeat). Here are just a few from the last three decades: 1980-1985 - Operation Swordfish, Operation Pipeline, and Operation Pisces; 1985-1990 – Operation Leyenda, Operation Snowcap; 1990-1994 – Operation Man, Operation REDRUM, Operation Green ICE. And the list goes on and on.

3) Despite having spent over a trillion dollars on the War on Drugs and arresting millions of adults, usage rates remain relatively constant and cocaine is cheaper and purer than ever.

4) Meanwhile in Mexico people are getting killed almost every day and the violence only seems to be escalating. Perhaps it is time that policy-makers take a hard look at whether traditional law enforcement methods are actually fueling the violence. A recent report by the International Centre for Science in Drug Policy makes a fairly compelling argument that from an “evidence-based public policy perspective, gun violence and the enrichment of organized crime networks appear to be natural consequences of drug prohibition.”

So what’s the Solution?

Robust funding for treatment and prevention programs seems like the best and most humane option for limiting the negative impacts of substance abuse. This will help not only people in the United States, but Mexico as well, since it’s our country’s insatiable demand for drugs that is fueling the drug trade and associated violence in our neighbor to the south (at least so says U.S. Secretary of State Hillary Clinton). Plus, our own government already knows that treatment and prevention are cost-effective methods for dealing with drug problems (I’ve seen no such study touting the cost effectiveness of imprisoning someone for dealing drugs).

Until the U.S. aggressively confronts the limitless demand for drugs by its own citizens, we can expect more of the same: deaths in Mexico, massive arrests in the U.S., and clever operation names from the DEA. We must treat substance abuse as the health problem it is and stop prioritizing and celebrating arrests and incarceration over less exciting but more effective prevention and treatment strategies. The status quo simply does not work.