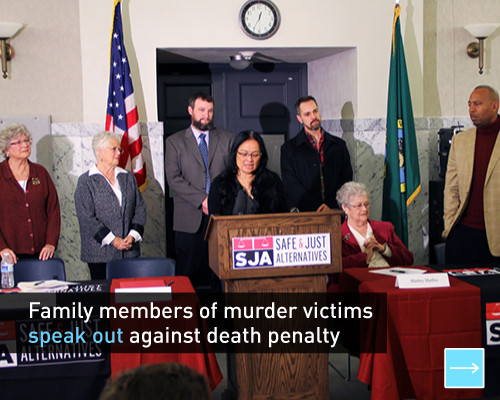 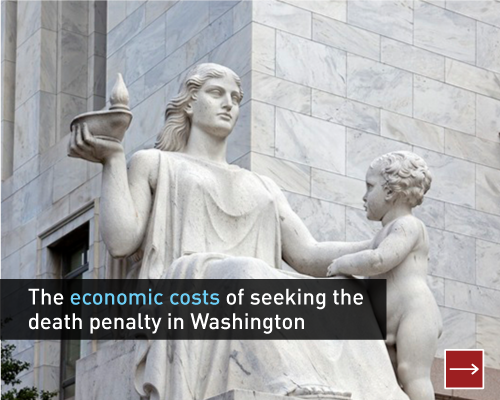 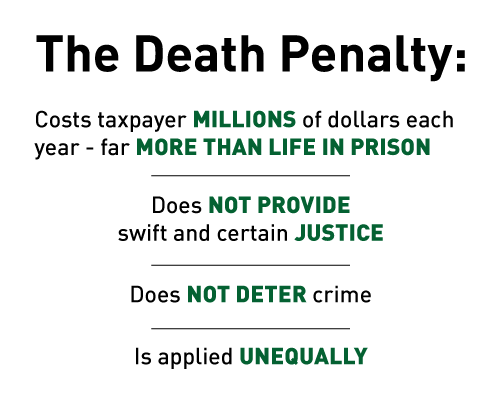 Published:
Friday, November 19, 2010
In September Governor Chris Gregoire, warning that Washington’s finances were “bouncing along the bottom,” by executive order decreed 6.3% across-the-board budget cuts for all state agencies. Just days before the Governor’s announcement the state spent almost $98,000 to execute Cal Brown, who had spent 17 years on death row for a crime committed in 1991. That sum was only the tip of the iceberg, however. As a recentreport by the Washington State Bar Association notes, the specter of a death sentence regularly adds a premium of half a million dollars or moreof legal and judicial costs per case.
Read more

The Reach of the Death Penalty

Published:
Tuesday, October 12, 2010
Defense attorney Mark Larrañaga visits Bellingham to speak about his experience as an attorney for defendants facing the death penalty. How many people does an execution affect? Prior to hearing Mark Larrañaga’s insights into the vast reaches of the death penalty, I naturally assumed that the defendant, his or her family, the victim(s), and the victim’s family were the principle people affected by the death penalty. I never considered how deeply jurors, attorneys, and their families can be affected. Years after a trial had come to an end, some jurors’ family members are brought to tears just talking about it. These persons are often so affected by the lengthy, emotionally straining process of a death penalty trial that they too often turn to substance abuse to help them cope. “He’s never been the same. He started hitting the bottle pretty hard when the trial ended,” one woman said of her husband’s experience as a juror. Mr. Larrañaga has become so keenly aware of how traumatizing a death penalty trial can be that in many of his cases he has requested that counselors be available to all involved parties after the trial is concluded. Read more
Read more

Published:
Friday, July 2, 2010
Utah’s June 18 execution of Ronnie Lee Gardner captured attention from around the world. Why is this newsworthy? The U.S. has taken the lives of over 1,000 individuals since 1976. Since that year, Gardner is only the third person in the U.S. executed by firing squad.
Read more

The Death Penalty: Momentum Builds To Replace a Broken System

News Release, Published:
Friday, May 7, 2010
Police chiefs, criminologists, and the American public also prefer life without the possibility of parole to a sentence of death.
Read more

News Release, Published:
Wednesday, November 25, 2009
The ACLU has filed a friend-of-the-court brief in the appeal of Cal Coburn Brown, who was sentenced to death in Washington state in 1993. The U.S. Circuit Court of Appeals for the Ninth Circuit overturned the death sentence in 2005, ruling that a potential juror had been incorrectly kept from the jury that found Brown guilty and imposed the death penalty.
Read more

Sentenced to Death: A Report on Washington Supreme Court Rulings in Capital Cases

An amicus brief challenging the exclusion of a juror in a death-penalty case
Explore More:
Criminal Justice
Death Penalty

In re PRP of Davis