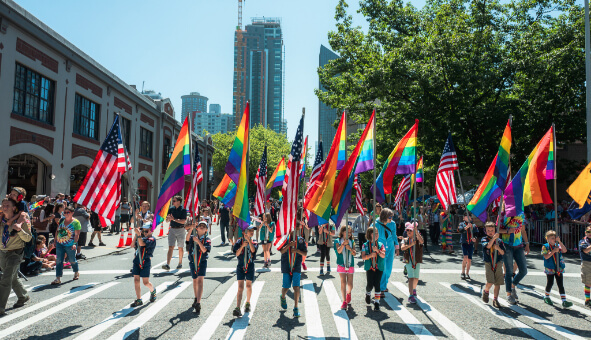 Seattle’s LGBTQIA+ Pride Month is going virtual with three days (June 26-28) of speakers, performances and activities with Gender Justice League, PrideFest, and us here at Seattle Pride for the Together For Pride weekend.

The organizers of Seattle Pride wish to acknowledge and stand in solidarity with other regional LGBTQIA+ organizations to condemn the senseless murder of George Floyd, standing together against racism in all forms. The LGBTQIA+ community knows firsthand the feeling of marginalization, and the importance of compassion and standing together – especially in this time of need. As with other impactful movements, the LGBTQIA+ movement also began with a protest. Much of Seattle Pride’s programming will be centered on matters of activism and centering black and brown voices.

For each of the three days, one organization is taking the lead in developing engaging program content - each day will offer a full schedule of program tracks, and featured sessions within each.

See below for more information on what to expect and where you can learn more.

CLICK HERE to stay up to-date on Saturday’s schedule of events featuring a variety of local and national talent, workshops addressing a wide range of topics
appealing to all ages, as well as youth activities and a series of trans-themed short films.

CLICK HERE to stay up to-date on Saturday’s schedule of events featuring a 12-hour live-cast including a family hour, queer youth Pride hour, a “preparing for Pride” hour, six hours of PrideFest mainstage programming, including hosts, artists, community features, and non-profit profiles, followed by a three- hour dance party from Uniting Souls. In solidarity with protesters, PrideFest will be centering much of its content on black voices and black artists.

Seattle Pride’s programming will culminate the three days with four program tracks supporting its Many Faces, One Pride focus – Speakers, Activities & Activism, Performance and Q&A/Interactive. The programming will be a mix of live and recorded 20- and 40-minute sessions – as well as brief intermissions between each session and a mid-day lunch break during which attendees will be encouraged to order food from a queer-owned business.

In addition to the program sessions, Sunday will also feature a Nonprofit Virtual Exhibition Hall and Vendor Virtual Village – in which online attendees will be able to visit a wide variety of vendor “booths” in a virtual version of Seattle Pride in the Park (formerly known as the Volunteer Park Pride Festival).
Currently, the following sessions have been confirmed with more to be announced soon: The jam-packed day of LGBTQIA+ fun also includes virtual performances by the musical acts originally slated for Seattle Pride in the Park. Headlining the musical performances will be Washington artist and radical indigenous queer feminist, Black Belt Eagle Scout. Other fan favorites will include CarLarans, Chong the Nomad, Fly Moon Royalty, Latinrose, Sera Cahoone, and Stephanie Anne Johnson & The Hidogs. The musical performances will be hosted by KEXP’s Marco Collins and popular Seattle drag queens Donnatella Howe and Betty Wetter.

Seattle Pride’s day is made possible with support from presenting partners Alaska Airlines and T-Mobile, platinum partner Salesforce, among many other community partners.

To participate in the Together For Pride events, please CLICK HERE to register. Registration is FREE but is required to participate.

The three organizations dedicate this month to not only the LGBTQIA+ community, but to the black, brown and indigenous communities which deserve a full measure of solidarity, action and love as part of the continued fight for freedom and human dignity.

Check out our event page for other Pride Month events – if you’re planning an event open to the public, submit your event for inclusion on our online calendar HERE.

On Sunday, June 28th attendees are invited to relive the Seattle Pride Parades with a special retrospective of past parade highlights on-air and online at 11:30 p.m. hosted by Seattle Pride’s Official TV Partner KIRO 7. Seattle Pride’s other media partners include iheartradio stations, KNKX and MOViN 92.5.

Also be sure to follow Gender Justice League, PrideFest and Seattle Pride on social media for ongoing updates and other information.