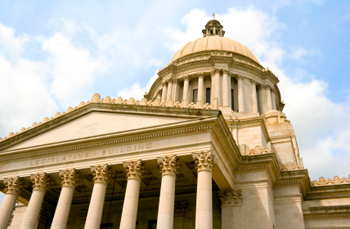 "It was a banner session for civil liberties," said Kathleen Taylor, executive director of the ACLU of Washington, in assessing the 2009 state legislative session. Citing voting rights reform, extension of domestic partnerships, privacy for car travelers, and fair play in community sports, she said, "The Legislature took significant strides in protecting privacy and extending fairness in several important areas."

"One disappointing area of inaction was drug policy reform. In a year of severe budget cuts, the legislature missed an opportunity to save significant money by reclassifying possession of small amounts of marijuana from a misdemeanor to a fineable civil infraction," said Taylor.

The Washington State Office of Financial Management estimated that the ACLU-backed marijuana reclassification bill (HB 1177, SB 5615) would save the state more than $16 million a year by no longer forcing the state to arrest, prosecute, and jail people for possessing marijuana for personal use. "In the next session, the ACLU will continue working for saner approaches to drug use that reverse the destructive effects of the misguided War on Drugs," added Taylor.

ACLU-WA priority bills that passed include the following.

Voting Rights Restoration – HB 1517: The Legislature reformed Washington’s unfair and unworkable voting law by passing a measure to automatically restore voting rights to citizens when they exit from the criminal justice system – no longer conditioning the right to vote on complete repayment of monetary debts to the legal system.

Fairness for Domestic Partners – SB 5688: Recognizing that all committed couples deserve the same legal protections for their relationships, legislators extended the rights and responsibilities of registered domestic partners to include all those granted to married couples.

My Car, My Privacy – SB 5574: Moving Washington to the forefront in protecting privacy of drivers, the legislature limited access to and distribution of information gathered by GPS and other technological devices in cars.

Here is more information about key victories for civil liberties in the 2009 session. The ACLU-WA’s full legislative agenda is available at www.aclu-wa.org.