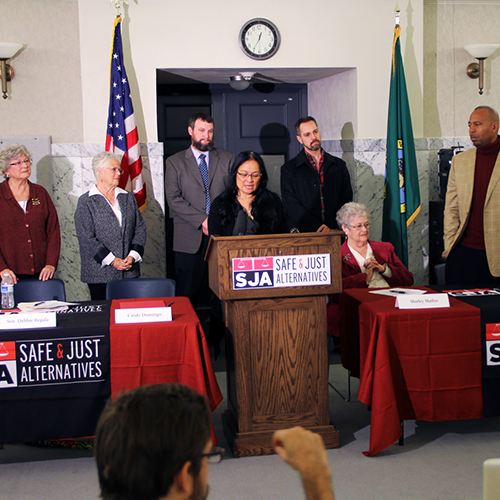 Olympia -- Senator Debbie Regala (D-Tacoma) and others who lost family members to murder urged the Legislature today to enact legislation that would repeal the state’s death penalty and replace it with life in prison with parole.  They spoke at a press conference at the State Capitol.

Karil Klingbeil, whose sister Candy Hemming was murdered by Mitchell Rupe in 1981, said her attitudes about the death penalty have come full circle after experiencing the harm that a prolonged capital case had on her and her family. “Had Rupe received life without parole after the first trial, my family would have been spared 20 years of additional suffering.  We would have been able to honor Candy’s memory and begin the healing process.” Klingbeil says that she now supports lifetime incarceration as the most severe punishment for murder.

Aqeela Sherrils, whose Terrell son was killed in a random shooting in 2004, is board member of a national organization of victims’ families working to end the death penalty. He explained the different reasons that family members oppose the death penalty: “Some family members were supporters of capital punishment, until they had to endure the pain and suffering associated with a long, drawn-out death penalty case. Now they feel that greater attention should be focused on the needs of victims and helping them heal. Others have been denied justice altogether: No one has ever been prosecuted for the murder of their loved one. They see resources that could be spent investigating unsolved crimes wasted on death penalty cases instead.”