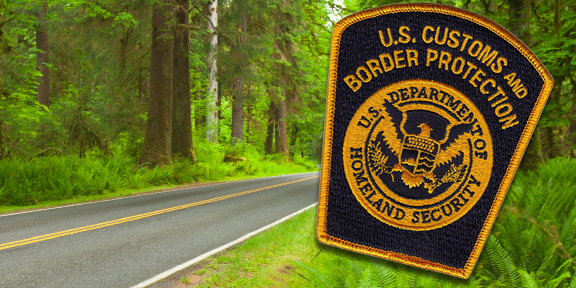 Three residents of the Olympic Peninsula have filed a class-action lawsuit challenging the U.S. Border Patrol’s practice of stopping vehicles and interrogating occupants without legal justification. Filed in U.S. District Court in Seattle, the lawsuit says that the Border Patrol’s suspicionless stops on the Peninsula violate constitutional rights, and it seeks a court injunction barring such unlawful stops in the future. The Northwest Immigrant Rights Project (NWIRP) and the ACLU of Washington are representing the residents and will seek class-action status for the suit.

“The Border Patrol’s actions have created a climate of fear and anxiety for many people living on the Olympic Peninsula. The residents in this suit all are U.S. citizens who worry that they could be stopped and questioned without reason any time they drive or are passengers in cars. We’re asking the court to put in place safeguards to stop the Border Patrol’s unlawful and unfair practices,” said Sarah Dunne, legal director of ACLU.

“People are being stopped based solely on their appearance and ethnicity. This is unlawful and contrary to American values. No one in a car should be stopped and interrogated by government agents unless the law enforcement officer has a legal basis to do so,” said Matt Adams, legal director of NWIRP.

The lawsuit seeks a declaration that the Border Patrol’s suspicionless stops violate the Fourth Amendment and exceed the agency’s legal powers. The suit seeks to prohibit Border Patrol agents from stopping vehicles without reasonable suspicion that an occupant has entered the U.S. without approval. It also seeks to prohibit stops altogether until each agent on the Olympic Peninsula has received training regarding what constitutes reasonable suspicion for a stop. The suit would have the court require that Border Patrol agents prepare documentation recording the basis of their suspicion that justifies each stop. Furthermore, the documentation should be easily accessible to a court-appointed special master to monitor compliance.

The plaintiffs have experienced unwarranted stops and interrogations in a variety of settings, all while going about their daily lives. Agents provided flimsy pretexts or no reason at all for the stops. Some stops appear to be based on nothing but the Border Patrol agents’ perception of the plaintiffs’ ethnicity or the color of their skin. The incidents are typical of troubling encounters which many residents of the Peninsula have had with Border Patrol agents.