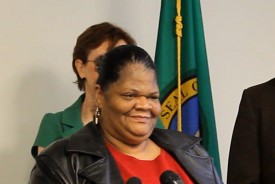 Reporting such older criminal conviction information violates the Washington Fair Credit Reporting Act (WFCRA) and the Consumer Protection Act.  Although the tenant screening company denied any wrongdoing, under the settlement, 273 Washington residents whose screening reports included criminal history information older than seven years are to receive a total of $109,200.

The King County Superior Court preliminarily approved the settlement last week and the 273 class members will be notified of its terms.  The court will hold a hearing to consider final approval of the settlement on December 13, 2013 at 9:00 a.m. Attorneys for the ACLU of Washington and the firm of Terrell Marshall Daudt and Willie PLLC are handing the case.

“Washington law limits the information companies can report so that people who have turned their lives around have a fair chance to make a fresh start,” said ACLU-WA staff attorney Vanessa Hernandez, who heads up a Second Chances project at the ACLU-WA to reduce barriers to employment and housing faced by individuals with criminal records. “We are pleased that defendants acted promptly to resolve this case and provide meaningful relief.”

In July 2012, Markeletta Wilson applied for rental housing with her daughter in a complex in Tukwila.  The landlord used the services of a tenant screening company to review the background of prospective tenants. The screening company subsequently issued a report about Ms. Wilson that included 1988 and 1995 convictions for drug possession.  As a result, the landlord denied Wilson’s housing application. Ms. Wilson was then forced to obtain rental housing elsewhere, at additional cost and at a location significantly further from her daughter’s workplace.

Under the settlement, defendants agreed to modify its processes in order to prevent reporting criminal history information in violation of the WFCRA.  Defendants will pay $400 to each class member, plus reasonable attorney’s fees and costs, and agreed that any settlement funds that cannot be distributed to class members will be divided between the Legal Foundation of Washington, Solid Ground, and the Tenant’s Union of Washington.  These funds will be used to educate Washington consumers about tenant screening and the WFCRA.

Under the WFCRA, consumer reporting agencies (CRAs) may not report “records of arrest, indictment, or conviction of an adult for a crime that, from date of disposition, release, or parole, antedate the report by more than seven years.” CRAs must also follow reasonable procedures to avoid violating the WFCRA. A violation of the WFCRA is per se a violation of the Consumer Protection Act.