By now most of us have heard that “crime is skyrocketing in WA.”  This claim is being used to justify the need to roll back the police reforms that the state Legislature enacted last year.

But … is crime really rising in WA?  The short answer: the evidence doesn’t support this claim.
Let’s take a closer look at the data.

Because there is a long process of collecting the data from all law enforcement agencies around the state, organizing it, and making it available to the public.  (See more details in the “Data Appendix” section at the end of the blog.)
This means no one can say yet what happened to crime rates in Washington State in 2021.  When someone claims otherwise, you should ask them what data they are referring to.

The uptick that made the news last year happened in 2020, over a year before the police reform legislation took effect. (Remember, there is a long lag in reporting crime rate data for the state, so in 2021 we were hearing about data from 2020).

3. There are a few larger jurisdictions in Washington that make their data publicly available earlier, so we can see what happened there in 2021. Together, these jurisdictions contain 40% of the state population.

And what can we see from these jurisdictions?  (see Figure 2) Figure 2:  Change from 2020-2021 for jurisdictions with publicly available data 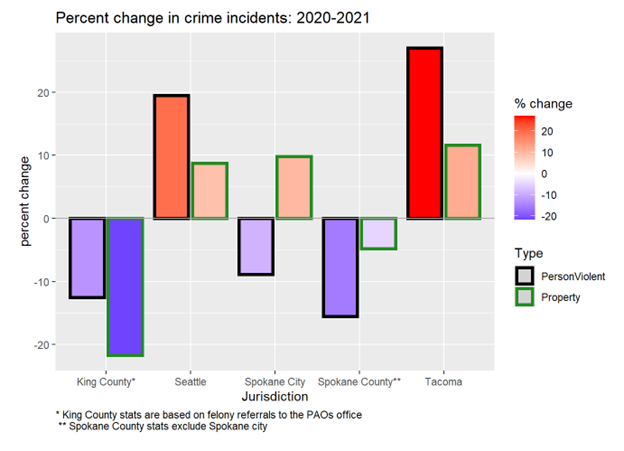 Bottom line: There is no evidence that crime is “skyrocketing” in Washington State. A more detailed report can be found online here:  https://rpubs.com/moxbox/wa_crime.  The graphs are interactive, and the full code can be downloaded for replication from the GitHub repository. Some additional details regarding the data can be found in the Appendix below.

Data Appendix
Statewide crime data for Washington State are released by different organizations, as noted below.  The lag in the public release ranges from 4 to 12 months after the year has closed. These WA OFM-SAC data are the source of the data used in Figure 1.

Data for 2021 are limited to the jurisdictions that provide public access to the data before they are published by the sources above.We found 5 such jurisdictions in WA state:

Together, these jurisdictions contain about 40% of the WA state population.
More information and links to all of the data sources may be found in the detailed report here: https://rpubs.com/moxbox/wa_crime