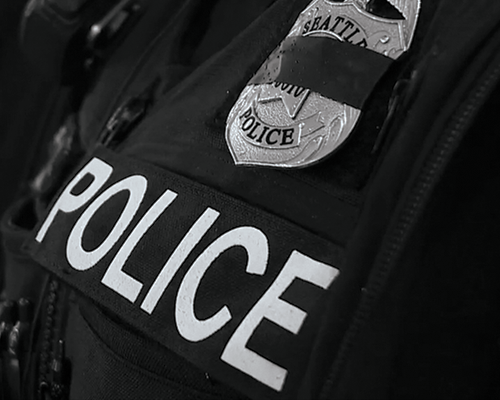 
The 2021 City of Seattle budget process kicked off at the end of September, ushering in a series of events (discussed in more detail in our next blog post) that will shape how much money will be appropriated for various city services, including the Seattle Police Department. Accordingly, the inaugural blog post in this series begins with one simple question: why do city budgets matter to policing issues?

City budgets reflect priorities. They provide a critical lens for examining how our elected officials rank the importance of various government services based on the amount of money they allocate for each. By following the money and scrutinizing city budgets, we learn about the choices that city council members and mayors make about what and whose needs take primacy.

Budgets articulate community values.  The amount of money a city allocates for human services and housing versus police, for example, says a lot about not only the kind of society we are, but also the kind of society we want to be. We believe that dedicating municipal spending to things like human services and housing promotes an inclusive, racially and socio-economically equitable society, and a city that is safe for all. There is a wide body of empirical evidence to support the view that investing in upstream social services (e.g. access to healthcare and affordable quality housing, and investing in community organizations that address chronic poverty) is highly effective at reducing crime, even violent crime. These investments which address the underlying causes of crime can increase racial diversity and make our communities more equitable and sustainable. Conversely, devoting extensive funds to police focuses too narrowly on social control (by means of, for example, coercion, containment, repression, surveillance, discipline, and violence) and punishment as means to reduce crime, without addressing the drivers of crime. Policing also exacts harmful social and other costs that are not given their due consideration in budget decisions. Social costs are disproportionately borne by Black, Latinx, and Indigenous communities, as well as people living in poverty.

This choice of values – equity and inclusion versus control and punishment - shapes and informs a city’s approach to addressing chronic social problems like poverty, homelessness, and race inequity. Budgets, thus, are not merely symbolic. They also carry real-life consequences for city residents, especially for those among us who must rely on them. For better or for worse, budgets have meaningful impacts on our communities.

The City of Seattle Budget


Let’s take a look back at the 2020 Adopted Seattle City budget and the money allocated to policing versus other city services. Although the focus here is Seattle’s budget, this useful exercise can be replicated to understand the budget of any community.

The City of Seattle consists of 40 departments (Table 1). Its total adopted budget for 2020 is approximately $6.64 billion. The Seattle Police Department’s (SPD) budget ($409.1 million)[i] constitutes 6.2% of the overall City of Seattle budget. On its face, this is a relatively small percentage of the overall City budget. However, if we remove the top three line items related to city infrastructure, Seattle City Light (SCL), Seattle Public Utilities (SPU), and the Seattle Department of Transportation (SDOT), the single largest line item in the City budget is for the SPD (Table 1). This is significant for a couple of reasons. Firstly, SCL, SPU, and SDOT provide essential city services and infrastructure at relatively fixed costs. They are therefore necessarily large and scale according to the needs of our growing city.  Together, they make up more than half (53.1%) of the City’s 2020 Adopted Budget, which has the effect of dwarfing the SPD budget as a proportion of the total City budget. Nevertheless, at about 6% of the City budget, the SPD budget is still larger than 36 city departments. This demonstrates that after essential infrastructure, Seattle prioritizes policing above all else.

Another way to understand the outsized role of the SPD budget in the City budget is to consider that the SPD budget constitutes nearly a full quarter (25%) of the $1.5 billion General Fund, the City’s primary fund which is reserved for operating resources for all the City’s services[ii]. General Fund revenue is generated primarily (79%) by way of tax dollars from Seattle city residents and businesses, and it is discretionary (i.e. its appropriation is up to City Council)[iii]. It does not cover utilities (SPU and SCL) and most of transportation (SDOT). This makes the SPD’s budget by far the largest line item that draws from the City’s flexible, taxpayer-derived funding. 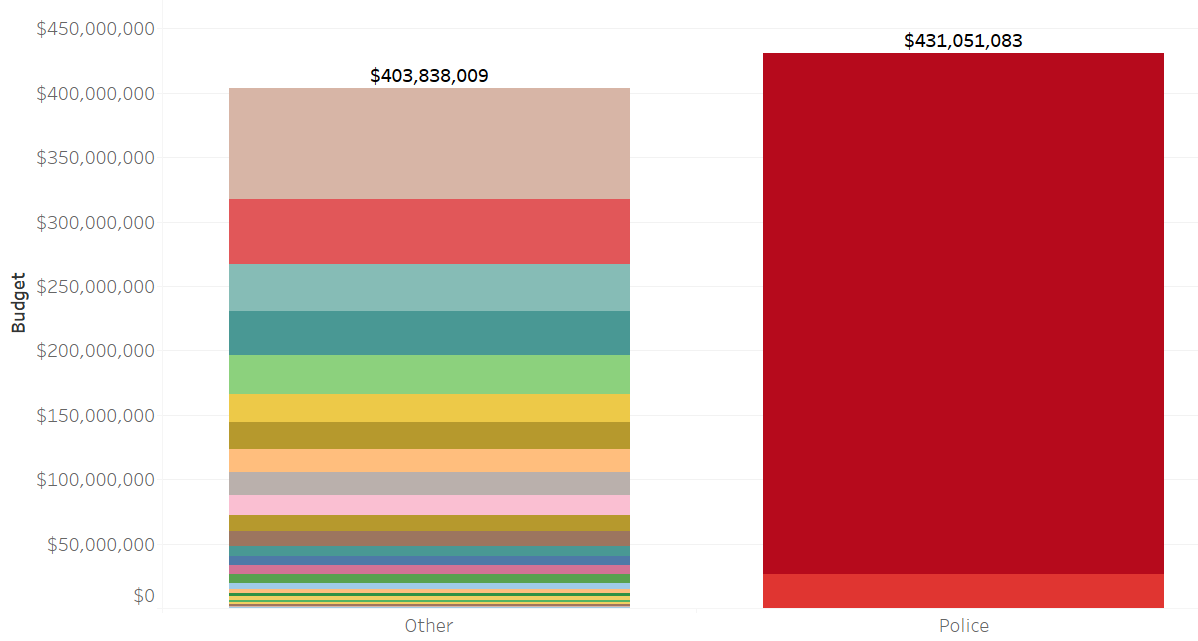 Compared to the budgets of other City of Seattle departments, the policing budget (SPD + Police Relief and Pension) is (Figure 2): 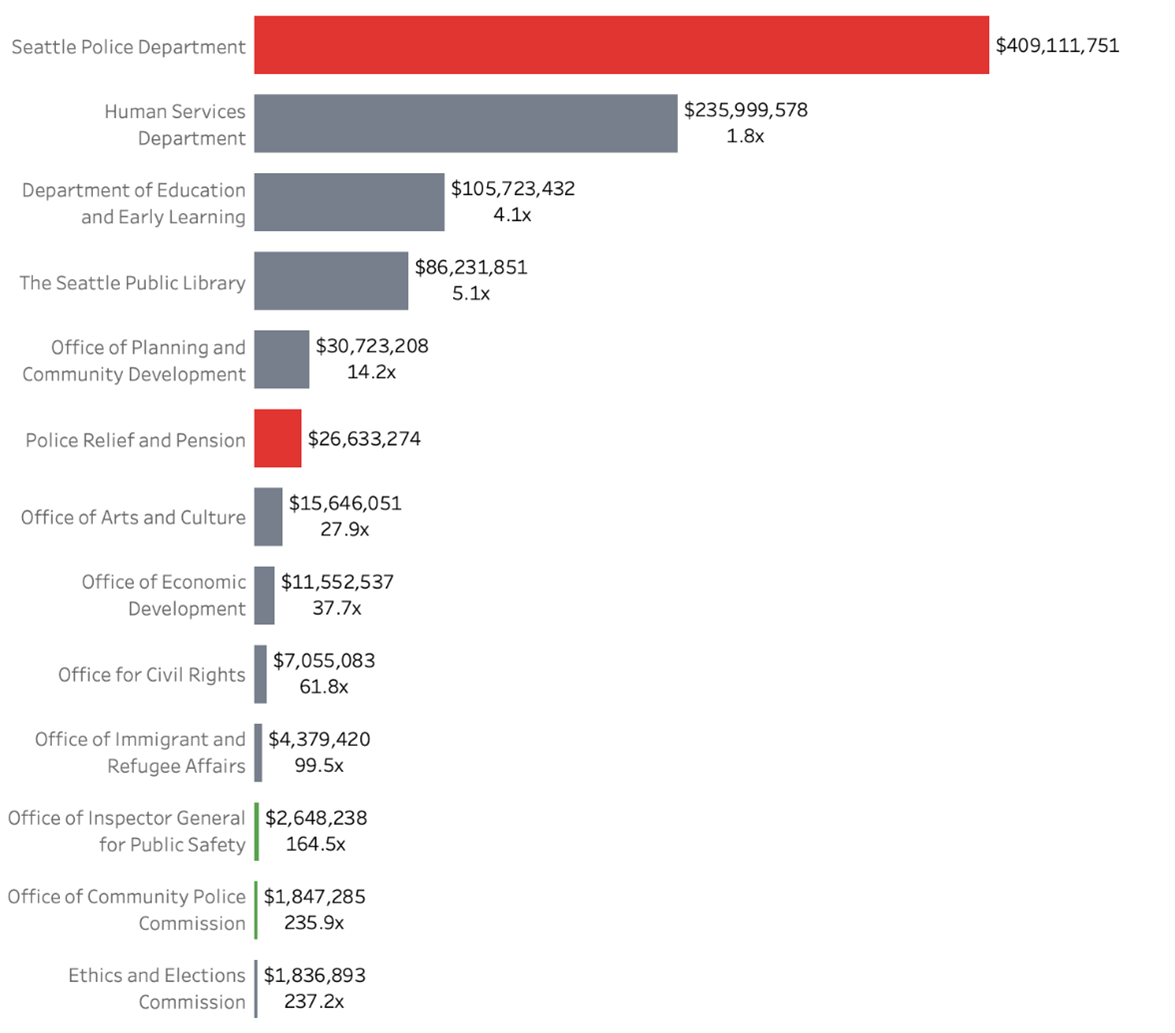 A close look at the City budget also illustrates the extent to which Seattle has invested so little in police accountability versus police functions. The police budget (SPD + Police Relief and Pension) vastly surpasses the budget allocation for the civilian entities tasked with police accountability—the Community Police Commission (CPC)[v], the Office of Police Accountability (OPA)[vi], and the Office of Inspector General for Public Safety (OIG)[vii]—combined.

Of the money allocated for both police accountability and for police, a meager 2% is dedicated to the three civilian accountability entities. The remaining 98% is for the police (Figure 3).

*For the purposes of this analysis, the Seattle Police Department budget represented here does not include the budget for the Office of Police Accountability (OPA). The OPA’s budget is represented separately in order to demonstrate the wide discrepancy in the amount spent on policing vs. accountability of the police.

The OPA is a civilian agency that resides within the SPD (to enable unrestricted access to SPD’s records), and the budget it is allocated is part of the overall SPD budget.

Conversely, the OIG and the CPC are city departments separate from the SPD and are allocated their own separate budgets (see Table 1). The City Budget Office considers the departments dedicated to police (SPD and Police Pension and Relief) and the departments dedicated to police accountability (OIG and CPC) as part of the group of departments which serve the function of “public safety”[viii], yet, as Figure 3 demonstrates, the city appropriates overwhelmingly more money to police than to the mechanisms that keep police accountable.

What does your city’s budget tell you about your elected officials’ priorities? What does it say about your city’s values? Do you agree with the way your City Council members and mayor have prioritized spending on policing versus critical city services like housing and human services?

[i] On August 9, 2020, the Seattle City Council rebalanced its 2020 budget and voted to cut $3 million of the $150 million remaining to be spent in the 2020 budget (which includes the $20 million in savings related to COVID-19 proposed by Mayor Jenny Durkan).
[ii] According to the City Budget Office, “the majority of resources for services typically associated with the City, such as police, fire, and parks, are received into and spent from one of two funds of the City’s general government operations: the General Fund for operating resources and  the Cumulative Reserve Fund for capital resources.” The SPD budget derives primarily from the General Fund. City Budget Office, City of Seattle, Washington 2020 Proposed Budget, available at https://www.seattle.gov/Documents/Departments/FinanceDepartment/20proposedbudget/2020ProposedBudget.pdf, p. 43.
[iii] According to the City Budget Office, revenue collections from sales (20.2%), property (23.5%), business and occupation (20.2%), and utility taxes (15.1%) together account for 79% of General Fund revenue. The remainder of the General Fund is supported by fees and charges (8.8%), traffic fines (1.8%), government and private grants (3.3%), and miscellaneous revenues (7.1%). City Budget Office, City of Seattle, Washington 2020 Proposed Budget, available at https://www.seattle.gov/Documents/Departments/FinanceDepartment/20proposedbudget/2020ProposedBudget.pdf, pp. 50-51.
[iv] Police Relief and Pension provides active and retired police officers and their beneficiaries pension and medical benefit services at tax-payer expense. Please note the budget allocation for Police Relief and Pension does not come from the General fund. The City of Seattle maintains a separate pension trust fund for Police Relief and Pension.
[v] The CPC, formally established during the course of the federal consent decree case brought by the federal DOJ in 2012 in response to serious legal violation by SPD, provides ongoing, community-based oversight of SPD the police accountability system. Although the CPC was created as part of the consent decree case, under the 2017 Accountability Ordinance it was given status as a fixed entity that will continue to function even if someday the consent decree case is closed.
[vi] The OPA investigates complaints against the SPD and recommends findings to the Chief of Police.
[vii] The OIG provides civilian auditing of the management, practices, and policies of the SPD and OPA, and oversees ongoing compliance with organizational reforms implemented pursuant to the 2012 federal consent decree.
[viii] The City Budget Office organizes each department into one of seven “functional clusters:” Arts, Culture, and Recreation; Education, Health and Human Services; Neighborhoods and Development; Public Safety; Utilities and Transportation; Administration; and Funds and Funding Sources. The departments in each cluster, with the exception of the last one, share a “related functional focus.” These clusters are important to the extent that they signify what the City broadly sees as the role the department serves. Other departments in the “public safety cluster” include the Seattle Fire Department, the Firefighters’ Pension, the Law Department, and Seattle Municipal Court.
Explore More:
Policing
Racial Justice
Read More