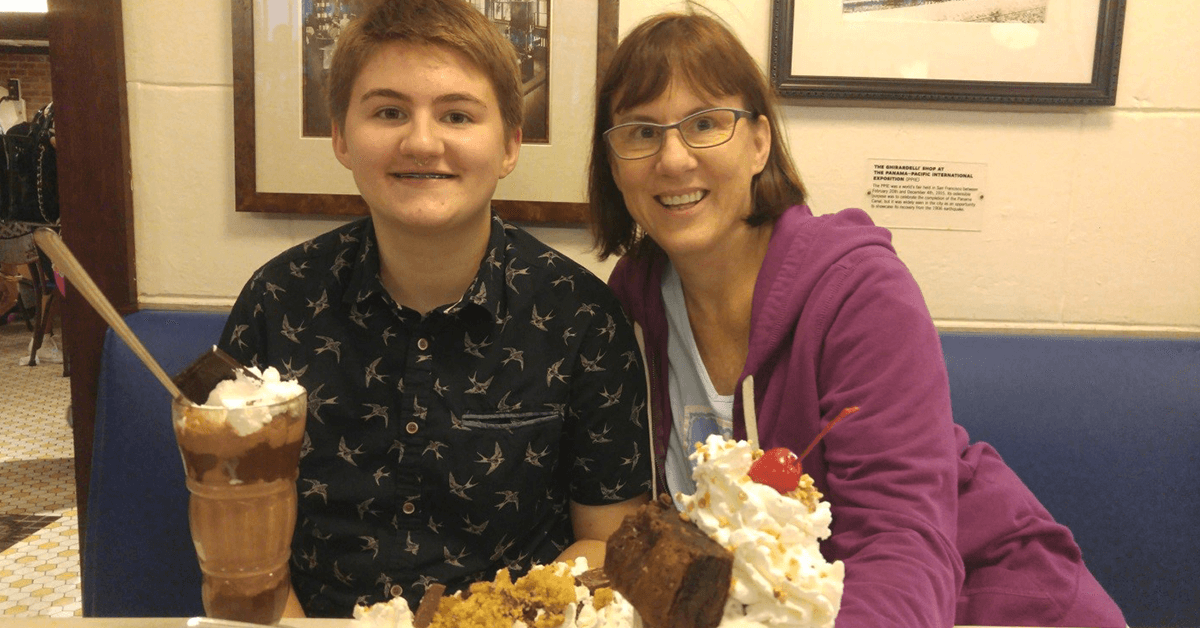 My name is Pax Enstad, and I’m a high school junior, a son, a brother and a friend.

I’m also a transgender boy. When I tell people this, it seems like everyone wants to know: What’s the precise moment when you realized you are transgender?

The thing is, there was no single moment, no bolt of lightning that suddenly hit me. It was more of a process of admitting who I am to myself.

When I hit puberty, I felt really gross and unhappy with my body. I stopped swimming and doing things outside, and started wearing baggy shirts. I asked my parents for a chest binder, but I didn’t tell them it was to flatten the breasts I was getting. My body was a thing that I tried to forget about.

I’m close with my sister, Maya, who is two years older and in college now. When we realized we both liked girls, we decided to come out to our parents together. On the day that same-sex marriage became legal nationwide, Maya and I bought rainbow balloons and streamers. We went to the Pride parade with our parents and afterward, we gave them a rainbow card that said, “We’re gay.”

I had yet to confront my own fear of being transgender. I thought, maybe all these feelings will go away, but they didn’t. Existing in a body that didn’t feel like mine became increasingly unbearable. Gender dysphoria is the clinical diagnosis, and the distress it caused me was severe; I panicked when I didn’t have my chest binder on. I put off telling my parents about my being transgender. I was embarrassed about it, and didn’t want to say anything until I was totally sure. By the time I finally told them, I knew I needed to have surgery to confirm the gender identity I’ve had all along.

What had been a years-long process for me was for my parents a sudden revelation. They love me and have done their best to be supportive of me. But PeaceHealth, my mom’s employer, refused to pay for the chest reconstruction surgery my doctor prescribed to treat my gender dysphoria, citing an exclusion for “transgender services.” It felt terrible to know that PeaceHealth, a nonprofit health care system, had decided that transgender people like me don’t deserve coverage for the same double mastectomy surgeries it will cover for others. It was treating essential treatment as something frivolous.

The possibility that PeaceHealth’s refusal to cover my surgery might lead to a delay in me receiving the surgery made me extremely anxious and desperate. I told my parents I could not wait. They could see this was not about making a “choice” to have surgery – this was something I needed to be me. To come up with the $10,000 to pay for it, my parents dipped into my college fund and took a second mortgage on our house.

After I had chest reconstruction surgery, I felt like a huge weight had been lifted. It was also literally true; I had lost six pounds. I felt so light and amazing. The relief was immediate, like, ‘Oh finally, that’s over!’
I went to homecoming with my best friend and was able to wear boys’ shirts I couldn’t wear before. I looked dapper and I felt proud.

But I’m still devastated by the fact that simply because I’m transgender I was refused coverage for the medical care that my doctor prescribed for me. With the help of the ACLU, we’re bringing a lawsuit against PeaceHealth because no one should be refused care because of who they are.

Gender dysphoria is real and serious. If left untreated, it can have terrible consequences, including suicide. Surgeries like the one I had are recognized as medically necessary treatment by every major medical association in America. Ensuring that transgender people get the health care they need will help save lives.
Explore More:
Healthcare Access
Transgender Rights
Youth
Court Case:
Enstad v. PeaceHealth