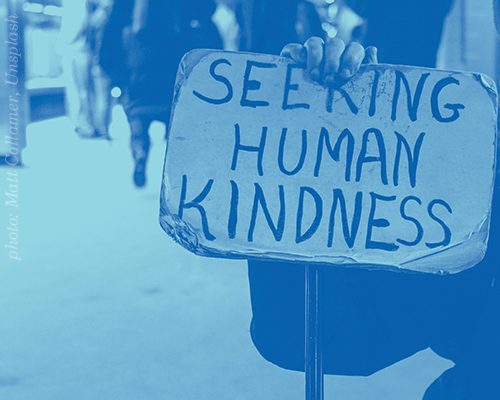 Laws that criminalize asking for help are ripe for repeal. Here’s how you can help


Courts have long protected the free-speech rights of people asking for help. Their message is clear: Cities are prohibited from criminalizing free speech, whether it is a scout troop’s signs advertising a car wash, or firefighters holding a boot for donations, or a person living outside holding a sign saying, “God Bless.”  Peaceful requests for charity in a public place are protected by the First Amendment.

A series of recent court decisions have reaffirmed this right. Yet, as communities across the nation struggle with housing affordability crises, wage stagnation, and a shredded social safety net, all too often they have adopted panhandling ordinances that are unconstitutional and counterproductive.

These laws cause cities to waste money on the criminal process, and they cause serious, lasting harm to individuals and communities, perpetuating the cycle of poverty and exacerbating racial disparities, all while doing nothing to address the root causes of poverty.

You can help identify these flawed laws, and advocate for their removal, by familiarizing yourself with what the First Amendment requires.

First, it’s important to note that any restriction of free speech must be “narrowly tailored” with regard to geographic area and the conduct regulated and must be justified by a clear public necessity.  For example, if a city claims that pedestrian/automobile driver conversation creates a traffic hazard at off-ramps, it must both have evidence of that hazard and may limit those conversations only at those locations.

An even higher level of protection is required when the regulation is “content-based;” such ordinances are unconstitutional unless they are narrowly tailored to meet a compelling governmental need and use the least restrictive means necessary. A prohibition of “solicitation” at an off-ramp, when other conversations or interactions are allowed, is almost certainly unconstitutional. Cities can regulate interference with traffic, such as blocking the flow of traffic, but when they single out speech (in the form of panhandling) they should expect the ordinance to be struck down.

Under this clear constitutional guidance, courts have struck down “anti-panhandling” ordinances at on- and off-ramps, prohibitions on solicitations for money at a bus stop or after dark, or when a person is leaving a parked car.  Prohibitions against “solicitation by coercion” have been struck down because general laws against aggressive conduct and coercion created adequate protection, demonstrating that the anti-solicitation ordinance was not the least restrictive means of regulation.

The ACLU-WA summarizes the legal requirements for panhandling ordinances, if a city chooses to have one at all, in a recent letter to the Washington State Association of Municipal Attorneys and the Municipal Research and Services Center (MSRC).

It can be viewed at the link below. The ACLU-WA also has a toolkit for people who want to improve the local government’s response to homelessness.
Explore More:
Economic Justice
Free Speech
Homelessness
Related Files