Your Voice, Your Priorities

City budgets reflect priorities. The size of the City of Seattle’s policing budget, a reactive approach to public safety, vastly surpasses the budget for critical housing and human services that proactively address public safety Does your city budget match your priorities?

This blog post is dedicated to answering the question, what is the budget process? This post will equip you with the knowledge to understand the various events that make up the budget process, the roles of the mayor and the City Council, and provide you the tools to empower you to participate and have your voice heard. While our blog series revolves around Seattle’s budget process and policing issues, you can apply these general tactics to your advocacy on all issues in your local community and across the state.

The Budget Process in Summary

On Monday, September 27, 2021, the City of Seattle kicked off its fall budget season with Mayor Durkan revealing her Proposed Budget for the 2022 calendar year. In her 6-minute address to the public, Mayor Durkan, whose term ends this year, shared her priorities and many challenges facing the City of Seattle, including: tackling the ongoing COVID-19 crisis,  additional investments in housing and homelessness services, and expansion of public safety alternatives, while simultaneously scaling up the number of sworn officers at Seattle Police Department.

Per state law, the Mayor is required to submit a proposed budget 90 days before the start of the fiscal year. The package consists of an operating budget and a six-year capital improvement program budget. The operating budget primarily consists of expenditures required to deliver services to Seattle residents. The capital improvement budget provides for large, often multi-year expenditures on infrastructure and other capital projects, such as fixing, improving, or adding new City facilities. Once the proposed budget is transmitted, the City Council, a co-equal branch of government, then spends the next couple of months reviewing the budget, deliberating, and amending it in open sessions, and hosting public hearings for feedback. This year, the City Council hopes to adopt an amended budget by Monday, November 22nd, when it will then be returned to the Mayor for her approval and signature.

The Nitty-Gritty of the Budget Process 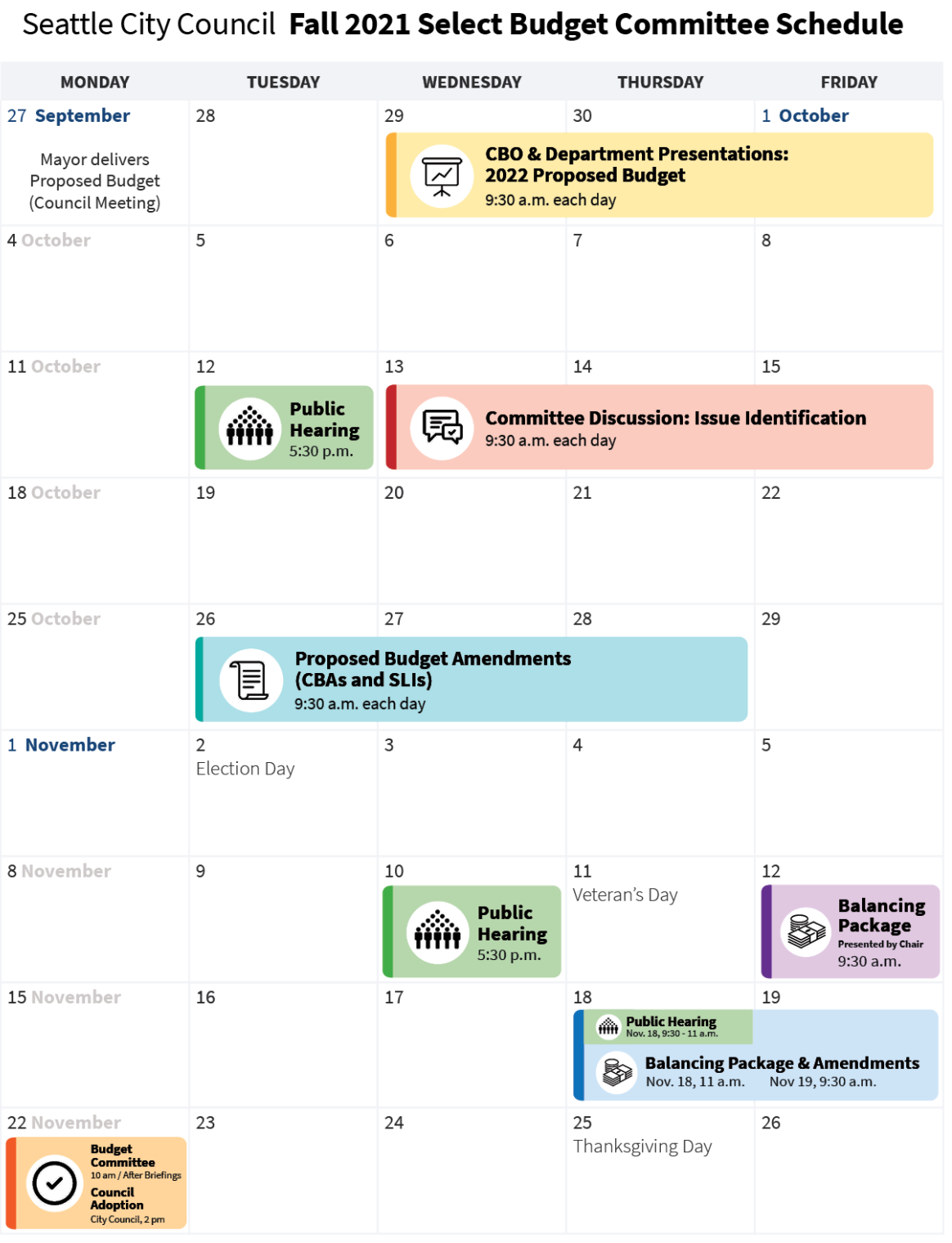 The City Council will tackle the budget in four stages: The budget process begins with the Council receiving high-level briefings from the City Budget Office and various City Departments to understand and ask questions about the investments proposed in the Mayor’s budget. Shortly after, the Council typically hosts their first public hearing to gather input from their constituents and hear their priorities. Following the public hearing, Councilmembers submit “Issue Identification” proposals to their non-partisan Central Staff for further analysis of Councilmembers’ priorities, which the Council then uses to propose specific budget actions for consideration by their colleagues.

During the budget review process, Councilmembers capture their priorities by developing “Statements of Legislative Intent” and “Green Sheets” for future budget action. Statements of Legislative Intent (SLIs) describe the Council’s expectations in making budget decisions and generally require affected departments to report back to the City Council on results. A Green Sheet (GS) is the mechanism that the Council uses to propose modifications to the Mayor’s budget, like increases or decreases of revenues, or expenditures for specific programs or services, and other modifications.

After the Council hosts their final public hearing and shares their priorities via SLIs and GSs, the Budget Chair will propose an Initial Balancing Package of changes to the Mayor’s proposed budget. Other Councilmembers may propose further adjustments to be included in a Chair’s Revised Balancing Package. This Revised Balancing Package, which is subject to further amendment in committee, forms the basis for the Council’s Adopted Budget. After the City Council votes to adopt the budget, the amended budget is sent back to the Mayor, who can choose to approve the Council’s budget, veto it, or let it become law without mayoral signature.

How You Can Shape Your City’s Budget

After the murders of George Floyd and Breonna Taylor and the national uprising against police violence that took place the summer of 2020, many cities across the country heard and acted on the demands of Black, Indigenous, and communities of color to divest from their police departments and reinvest those funds into community-led approaches to creating safety. Back in July 2020, a supermajority of Seattle Councilmembers committed to this goal. However, that commitment to Seattle’s BIPOC community was stalled shortly after on the premise it would take time to transition from a system that is fully dependent on police response. Now is the time to hold them accountable to their original promise. You can do this by actively participating in this year’s budget season: show up, tune in, and raise your voice. Email and call your Councilmembers, sign up for public comment and stay engaged.

Here are some ways to get involved. The Council has scheduled three public hearings, all to be held virtually, for constituents (yes, you!) to share thoughts on how the City’s budget should be allocated. The dates of the public hearings are: Residents also regularly have the opportunity to share their priorities on Mondays at 2 p.m. during regular City Council meetings. Additionally, there are opportunities for public comment during the first 30 minutes of every Council budget meeting. For instructions on how to give comment and to register to give comment, visit this page. The signup form is available two hours before each session begins. If you are not able to provide public comment, you can always email all nine Councilmembers by sending your comments to [email protected] or contact them individually. If you don’t know who your Councilmembers are, you can find that information by typing your address here.

City Councils and their budget processes vary all throughout the state. Some councils are full-time and have a team of analysts doing research, while others operate on a part-time basis and with limited resources. While this blog post examined Seattle’s budget process, we believe you can apply the same general tactics and techniques in your local town or city to shape your community’s priorities. To find more information on municipal budgets in others cities in Washington, make sure to visit Municipal Research and Services Center’s website here.

Budgets are moral documents that reflect who and what we value. Too much is on the line to take a back seat. This fall, make sure to share your voice with your elected officials to shape your City’s budget in solidarity with the priorities of Black, Indigenous and communities of color.