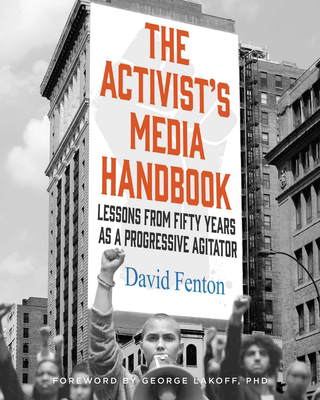 David Fenton has been at it a good while. Founder of Fenton Communications, and part of the working that went into creating J Street, Climate Nexus, the Death Penalty Information Center, and Families for a Future doesn’t begin to say it. He brings fifty years of activism to bear to his new book, The Media Activist’s Handbook: Lessons from Fifty Years as a Progressive Agitator (Earth Aware Editions/Simon & Schuster).

“I met David in 1970 when we were both teenagers in the movement. I had a clenched fist as a Black Panther. David had a camera that captured my fire and innocence. His memoir is a guide for activists who need to be good storytellers to win.” – Jamal Joseph Writer.

“David is the progressive world’s chief evangelist on the importance of communications and language in social movements. His help was essential in MoveOn’s campaigns on climate, economic justice, criminal justice reform, and against the nuclear arms race and the Iraq war.” – Wes Boyd and Joan Blades.

“Any student of American history in the last half-century will profit from this inside account--and anyone trying to make change now will profit from grappling with these hard-earned lessons.” – Bill McKibben.

Joining David Fenton here tonight in conversation will be climate activist Brady Piñero Walkinshaw, CEO of the new non-profit organization, Earth Alliance, and until recently before that, CEO at Grist.