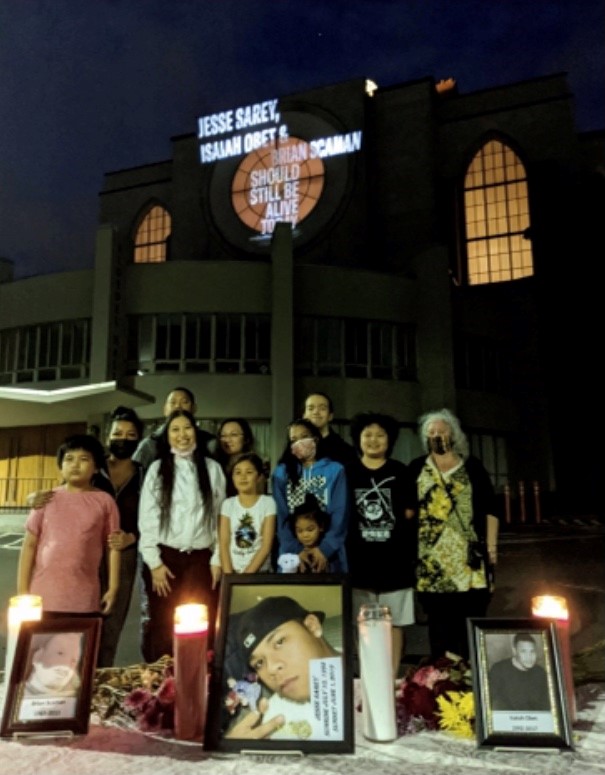 There may be times when we are powerless to prevent injustice, but there must never be a time when we fail to protest.
-Elie Wiesel

My foster son, Jesse Sarey, was killed by Officer Jeff Nelson of the Auburn Police Department on May 31, 2019. Jesse was 26 years old. He was the 19th person in 2019 killed by police use of deadly force in the state of Washington since implementation of Initiative 940 (I-940), which requires de-escalation and mental health training for police, and changed the law to remove a legal barrier that prevented prosecutors, as a practical matter, from charging officers who killed someone. Washington’s previous statute required prosecutors to prove “actual malice” — the most restrictive standard in the country. With Jesse’s biological family and supporters by our side, Officer Nelson was charged with second-degree murder and first-degree assault in August 2020. Officer Nelson is only the third officer to be indicted for taking the life of a civilian in Washington State history and the first under I-940. Nelson is the first officer in the State of Washington to be prosecuted for taking the life of a civilian in 30 years. Less than 2% of police officers nationally are held criminally accountable when they kill someone. This is why State v. Nelson needs your attention, and the nation’s. Officer Nelson’s trial begins in June 2022.

Jesse came to live with me when he was 11 years old. Jesse’s family came to America from Cambodia during the Khmer Rouge Regime to escape being killed after being in a refugee camp for six years. Jesse was part of the first generation to be born here. The elders are heartbroken that life in America has been a difficult journey for their children. Jesse is a by-product of the school to prison pipeline and mental health and foster care systems. He is amongst many foster children who aged out and entered homelessness.

My foster son was a funny and sweet young man who was suffering a mental health crisis on May 31, 2019. On this tragic day when Jesse’s life was taken, Officer Nelson had two encounters with Jesse. During the first encounter, Jesse was visibly in crisis. Officer Nelson instructed Jesse to leave the area, which Jesse did. Twenty minutes later and in a location across the street, Jesse was sitting calmly enjoying the warm summer-like day eating ice chips and leaning against the ice machine, when Officer Nelson engaged him again and attempted to initiate arrest for disorderly conduct. Through his actions, Officer Nelson needlessly escalated the situation, leading to Jesse’s untimely death. Within 37 seconds of contact, Officer Nelson shot and killed Jesse; another unarmed person of color having a mental health crisis, killed by police. At no time was a mental health response team called to de-escalate.

In 11 years, eight people were killed by police deadly force in Auburn, WA. Three of those victims were killed by Officer Nelson. Nelson also killed Brian Scamanin 2011 and Isaiah Obet in 2017. Jesse is Officer Nelson’s third murder victim. He is currently on house arrest and still on the Auburn Police Department’s payroll. His being off the streets has possibly prevented a fourth killing.

On June 17,, 2021, Jesse’s mother, Kari Sarey, died, I believe of a broken heart. I was at her bedside as she passed from her earthly body to her spiritual one. She and I worked together in this fight. As our family continues the fight seeking justice for Jesse, many more have joined this unique “family” of impacted people. This is a difficult system to navigate. Whenever we see on the news another person has been killed by the police, our trauma is retriggered. We must keep alive the memories of all people who have suffered the same fate as Jesse and George Floyd. Only as a unified voice can we stop unjust travesties from happening to yet another family. When Mr. Floyd called out to his mother, he was calling out to all the mothers whose children died at the hands of the police.

No human being should die the way my foster son did. We need to be unified and not divided by showing our support for the cause of exposing and eradicating police violence, which disproportionally targets Black, Indigenous, and People of Color, including Asian Americans and Pacific Islanders, throughout our country and state.
Explore More:
Policing
Racial Justice
Read More